Who is Eric Greer?

I am a Maine native who enjoys hiking, camping and musicals but get to spend most of my days infront of my computer coding all sorts of software. I enjoy the challenge of solving problems and being able to create new programs.

I graduated from WPI on May 15, 2010 with a Bachelor of Science Degree in Computer Science and a minor in Management Information Systems. I continued my education there for the 2010-2011 school year graduating with a Masters of Science Degree in Computer Science. While at WPI I worked for the technology Helpdesk which helped further my enjoyment of problem solving. I also got to spend a term in Puerto Rico working out on a boat doing ecological assesments with some pretty awesome people.

After college I worked for Sybase Inc. as a software engineer developing database drivers, before moving to my first startup Liquid Wireless. At Liquid I was able to work on a advertising system that served millions of clicks / day, I got to manage the entire stack and really developed both technology chops and management skills as I eventually managed the entire technical team.

In June of 2015 I left Liquid to join Apsis Labs where I am able to get my hands into lots of cool codebases as a consultant across a large range of web technologies. 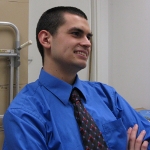 I work for Apsis Labs, and the opinions expressed here are my own and do not necessarily reflect the views of the company.